The Topeka Capital-Journal by Kevin Haskin 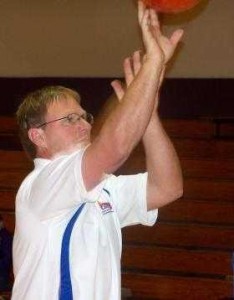 There is nothing unusual about Bob Fisher stepping to the foul line.

A soil conservationist for the USDA by trade, Fisher shoots free throws every day. Roughly two hours on average.

The challenges vary, but on Tuesday he was attempting to make as many shots as possible in 30 seconds. He hit 27. And was disappointed.

He knows. He holds the world record. One of 14 Guinness has certified for Fisher.

His mark of 33 in 30 seconds still stands, but there were factors why Fisher felt a bit frosty from the line.

A studio audience was cheering. Jay Leno was hosting. Charles Barkley was competing.

Fisher was on the Tonight Show. It both taped and aired on Tuesday.

“The studio audience is great, but it is different than just shooting in the gym itself,’’ Fisher said.

Doing just that has become a steady pursuit for Fisher, 55, the past three years. His wife, Connie, has been alongside — mostly to rebound misses off the rim at first, now to retrieve makes out of the net, while reinforcing the blazing touch Fisher perfected.

Inside Edition did a shoot last year after the New York Times sent a reporter to the Fishers’ home in Centralia to do a piece that ran March 15. By then, the Tonight Show had expressed interest too, though it decided to wait.

While in the Los Angeles area recently, Fisher placed a call to the show’s producer to gauge interest in an exhibition. They hooked up, studied how the set could accommodate a goal and an appearance was scheduled. Fisher was excited to learn Barkley would also be a guest.

Fisher not only sat next to Barkley during the interview segment with Leno, but also shot against the Hall of Fame forward, who turns 50 next week. For the record, Barkley made 10 free throws during his 30-second shoot.

“I can’t think of anyone better to be on the show with,’’ Fisher related. “Charles is smart, funny and tells it like it is. Plus, he was a great shooter, a lot better than what he gets credit for.’’

That last observation was something Fisher elaborated on as Leno held aloft a picture of Barkley shooting for the Phoenix Suns. Earlier in the show, Barkley exclaimed: “Ain’t nobody (55) can beat me at anything.”

At free throwing, Fisher can beat anyone — with form, and smarts.

“With our brain, the key word is elasticity,’’ he said. “Failure is not failure. Failure is progress. Failure is information.’’

That insight was not something he shared during the brief sit-down with Leno. Instead, Fisher identified Centralia’s proximity to Topeka, modestly referenced his sub-.500 stints coaching at the middle school and high school levels, and mentioned the instructional video he produced five years ago.

Pictures were also shown of the contraption Fisher built to expedite practice from the foul line, with Connie underneath the hoop.

“So this is another dream date with Bob,’’ joked Leno.

Fisher laughed at the remark and also called Connie, who was on set and helped with the shooting segment, “the love of my life.’’

Obviously the 30-second shot block was the entertainment NBC desired. During rehearsal, Fisher was on fire, though the 27 he managed to make for the show sufficiently impressed the audience … and those rooting back home in northeast Kansas.

“Everybody was super, super nice and the producer thought it was great,’’ Fisher said. “Everything went pretty quick.’’