Coach Bob has over 20 years of basketball coaching experience. Below you’ll find some commonly-asked questions about the physics of free throw shooting. At the bottom of the page, you’ll be able to learn even more tips!

The physics aspect of shooting a free throw involves distance and deviation. Distance is determined by two factors: launch angle and launch speed. Players have a choice between shooting for a larger target by using more arc or going for a shooter’s touch and shooting with their ideal arc for their height. Players should experiment and find which works best for them because this can vary from player to player.

For example, James Harden is 6’ 5” and is shooting with a 49.6 degree launch angle, which is pretty much spot-on for his height to achieve the slowest moving ball at the rim. Hardin definitely has a ‘shooter’s touch’ going for him because he is releasing with the optimum angle for the slowest moving ball as it nears the rim. However, Stephen Curry does not. Curry releases with a higher launch angle than average. According to the data from the NBA’s SportVU motion tracking, Curry is shooting with a 58.1 degree launch angle. Curry is opting for a larger target rather than a slow-moving ball as it nears the rim. The higher the launch angle the larger the target area of the rim.

Both players have found what works best for them. In the study, The Physics of an Optimal Basketball Free Throw, Irina Barzykina confirms that…“all players have different consistency in release angles and velocities.  Some might need more space for error in velocity, and thus need a higher throwing angle, while others might aim lower because their velocity control is much stronger.” 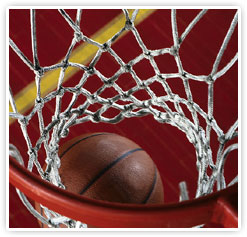 What launch speed/how much force do I need when shooting?

What is the best angle to shoot from?

Launch angle is simply the angle at which you launch the basketball towards the basket.  For our discussion here, having your arm straight out and parallel to the floor is a 0-degree angle.  Having your arm straight up pointing to the ceiling is a 90-degree angle.  Halfway in-between these two extremes would be a 45-degree angle.  Your distance from the goal and the release height of your shot determine the ideal launch angle for a slow-moving ball at the rim.  The closer you are to the basket, the higher your launch angle will be.  A two-foot shot released from a height of 8-feet requires a launch angle of 72 degrees to produce the slowest moving ball at the rim.  As you move away from the basket, your launch angle decreases, a free throw is approximately 51 degrees and a 3-point shot is approximately 45-degrees.

The release height of the basketball shot is largely determined by the height of the player shooting.  According to Professor John Fontanella, the ideal angles from the free throw line are as follows:

These angles produce the slowest moving ball as it approaches the rim, which gives you a shooter’s touch.

Shooting is an optimization process.  Complicating this matter is the fact that your target area increases with a higher launch angle.  The higher the arc, the larger the target.  In theory it makes sense to shoot with an exaggerated high arc, thereby increasing the size of your target.  However, higher arc requires more force at the time of release to propel the basketball higher, which makes it more difficult to control the shot.  In addition, the shot will no longer be a ‘soft shot’ because gravity increases the speed of the ball as it falls.  For each 0.1 second the basketball falls through the air, it increases in speed.  The faster the ball is moving, the greater the collision with the rim.

How far is the free throw line in basketball?

What is a “Shooter’s Touch?”

The maximum (terminal) speed of a dropped basketball from a tower is 21 meters per second (or 47.45 miles per hour).

Magnus force is stronger for a basketball than a baseball. The basketball is bigger and the magnus force depends on the cube of the diameter. However, linear and rotational speeds of a baseball are much greater (which is why a baseball curves).

At typical speeds in a basketball game, air resistance (drag force) is about 10% of the force of gravity. Drag force varies as the speed of the square.

A correlation exists between the size of the ball and drag force. The ball must move the air out of its path as it travels. The bigger the ball the more area there is to “sweep away”.

Drag force is proportional to the density of the air. For example, cars get lower gas mileage in the winter because the air is denser.