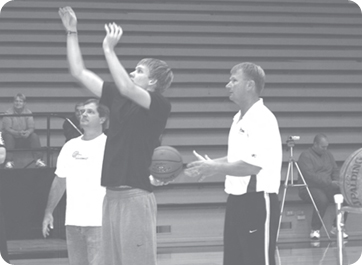 Bob Fisher is at it again. More baskets to make…more records to break. But, this time he teamed up with Nemaha Valley High School senior, Garrett Steinlage.

Saturday afternoon, November 20th, Fisher and Steinlage set out to break two Guinness World Records. The first was in the most free throw category in one minute by a pair. The current record was 26, held by Shannon Brown and Lamar Odom of the Lakers. The duo scored 29.

The second record was for a similar category, most free throws in one minute using two balls. The existing record for this was 10, but shortly before their attempt Fisher was notified by Guinness that a new record had just been set at 20, raising the bar. Fisher and Steinlage squeaked out 21.

Fisher also broke two other records solo on Saturday. Record number three was for most free throws in two minutes while alternating hands. The previous record was 44 shots, Fisher made 62.

Record number four was one implemented by Guinness for most free throws in one minute using alternating hands. Fisher completed 35.

A fifth record was attempted for most free throws in an hour, which is held by Perry Dissmore at 1,968. “This record has been and continues to be a real challenge because, at 53, I am not the man I used to be,” says Fisher. “I gave it my best, but only managed 1,905. The next time I try this one, I think I will start with it first.”

A nice crowd of people came out to witness the attempts and three video cameras were rolling to document the records. Although the marks were achieved, Fisher says that Guinness has not yet approved them. “There is no doubt in my mind that they will, as long as they are not surpassed in the interim.”

Fisher holds several free throw records already, but for Steinlage, this was a new and exciting experience. “Bob had worked with me on my shot earlier in the summer,” says Steinlage. “He actually called me up about four weeks ago and asked if I wanted to break a world record with him. Needless to say, I was kinda at a loss for words and pretty excited!”

Steinlage, who is a shooting guard for his team, says that he and Fisher didn’t practice a lot, but then they did, he feels he got a lot out of it. “He is by far the best shooting coach I’ve ever had. The second record we broke, the two ball tandem free throws, we actually didn’t practice at all before the event. We ran through it right before the attempt, and luckily it wasn’t a whole lot different from the first record. It came pretty naturally.”

Steinlage has been playing basketball since he was in the second grade and says that working with Fisher has gained him a great amount of skill. “I can’t begin to tell you how much valuable information and pointers he has given me about shooting. Hopefully all of that will pay off this basketball season.”

As far as experience goes, Steinlage adds that this was something he will never forget. “Not just the aspect of breaking the record, but also for the time I have gotten to spend working with Bob and him helping me on my shot. While both of our names will appear on the record, it was mainly all his doing. Without his coaching and tips, there would be no way I could have helped him enough to break the records.”

Presently, Steinlage says he hasn’t made any plans for college or to play ball at that level, but he does add that breaking any more records isn’t part of his plans for the near future. “Right now it’s time to focus on basketball season, not leaving me much time for other practice. I think I’ll leave the record breaking to Bob.”