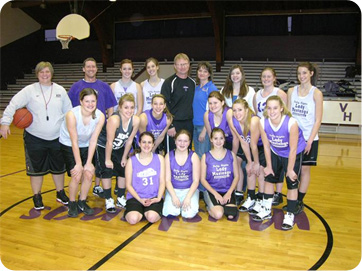 “I told my wife it feels pretty good,” the 52-year-old said.

Saturday in the Valley Heights gym, with about 12 volunteers and two witnesses present, Fisher made 50 of 59 free throws in one minute to beat the Guinness Book of World Record’s mark of 48 set in 2001 by David Bergstrom of Sweden.

Fisher has worked for 22 years as a soil conservation technician with Natural Resources Conservation Services, USDA, in the Seneca field office and is the fourth of 10 siblings, six boys and four girls, born to the late Lawrence and Helen Fisher.

With the help of the Valley Heights girls’ basketball team feeding him balls, Fisher’s record was recorded on his third try.  He has put together a “Secret to Shooting” video in 2008 and is writing a book on shooting.  He used two of the four release techniques featured in the video.

On Fisher’s first attempt, the ball was coming off his index finger.  He tied Bergstrom’s record.

On his second try, Fisher switched to releasing the ball from the middle and ring fingers.

“I was going for volume,” Fisher said.

Still using the middle and ring finger release technique, Fisher said he concentrated more on accuracy and slowed down on his third attempt at the record.  After he broke the record, he tried a fourth time to better the 50 charities.

“I went for speed,” he said.  “Fatigue became a major factor.  I started throwing it like a shot put.”

The two witness statements need to be sent stating that the Guinness guidelines were followed and Guinness could take between four and six weeks to validate Fisher’s feat.  In the meantime, Fisher may try to break it.

Fisher played for Centralia High School, where he graduated in 1975, and is an assistant coach with the VHHS girls’ team.  He works on shooting with both Mustang squads.  He’s well known in the Twin Valley League, where he has spent most of his last 20-plus years coaching.  Fisher was at Onaga, Axtell, Baileyville and Nemaha Valley.

Fisher’s interest in shooting stems from a desire to get into shape and meeting Dr.  Tom Amberry, who formerly held the Guinness book’s world record in free-throw shooting, and Ted St. Martin, the Guinness record holder for most consecutive free-throw shots made.

In September, Fisher started going almost nightly to the Vermillion gym one or two hours to work on shooting and getting into shape and he thanks Unified School District Superintendent Richard Flores for letting him use the gym.

“That was a major factor,” Fisher said.  “Without that there would be no record.”

“The first time I did that, Connie got a little upset,” he said.  “She laughs about it now though.”

Fisher does not claim to be an expert of anything.  He says he is smart enough to listen to the medical experts and use Google.

He has compiled lots of information on the mechanics of shooting and included variables.  Practicing provided considerable insight into the variables involved in shooting, he said.

“Shooting is difficult,” he said.  “At last count I had 49 variables, which can affect the shot.  Anybody who says shooting is easy simply does not know what he or she is talking about.”

Fisher’s video demonstrates four types of release and last summer Fisher tried to provide his findings to high school and college coaches to help other players and programs.

“Nobody was interested,” he said.  “The only person who understood the value of what I was doing was Heights girls’ coach (Ryan) Noel.  His emphasis is on doing what he can to help his team improve and he does not allow his ego to get in the way.  I am finding that this is a rather rare quality in coaches.”

Fisher’s research covers range and motion and many technicalities about releases.

Breaking the record has brought him considerable attention, he said, but added he feels he can do better.

“I understand how shooting variables interact and that has been the difference,” he said.  “This knowledge has accelerated my improvement.  I have been practicing for a very short time compared to previous record setters.   Now practice is more fun, because I understand what is going on when I miss and can adjust accordingly.  Now that the pressure is off, I will do better.  Shooting has been passion and a hobby for me.”